One of my Subaru-driving autocross friends described it as “The best Fast and Furious movie, hands down!” Tongue-in-cheek hyperbole? Perhaps, but, in this case, he was absolutely right. The object of our admiration was an animated short barely 7 minutes in length that is, for diehard car nuts, the best in the series of Mater’s Tall Tales Cars Toons that have appeared to fill the time between the 2006 debut of the Disney/Pixar movie Cars and its Cars 2 sequel debuting on June 24.

Said animated short, titled Tokyo Mater, starts out as another sleepy day in Radiator Springs is interrupted by three of the Delinquent Road Hazards tuner cars speeding and drifting along Route 66, with an angry Sheriff in hot pursuit. The sight of this mad chase leads the town’s dilapidated tow truck, Tow Mater, to recall the time that he stumbled upon the stranded and broken-down Ito-San, who happens to look suspiciously like a dark blue 7th-generation (S120) Toyota Crown from the mid-1980s, as shown at the upper right (or, according to other pundits, the 1980s iteration of the ridiculously long-lived – 1967 thru 1997 – first-generation Toyota Century, as shown at the lower right). Tow Mater then takes action and tows the troubled ‘toon Toyota all the way to Tokyo, where… well, just head on over to Disney.go.com and see for yourself.

As for the Cars movie’s star, Lightning McQueen, he has been variously described in Wikipedia as “based on generic NASCAR vehicles, but with design influences from the Chevrolet Corvette”; by Cars director John Lassiter himself as “a hybrid between a stock car and a more curvaceous Le Mans endurance racer, with some Lola and some [Ford] GT40” and by yours truly as a sort of neo-retro Plymouth Road Runner. Yet, we’d all be wrong, for the real Lightning McQueen is actually a Toyota MR2 Spyder (or MR-S, as it’s known in Japan) modified to run in Japan’s Super GT300 racing series!

Super GT is Japan’s rough equivalent to the U.S.’s NASCAR racing series. Since 1996 it has been divided into 2 classes: GT300 and GT500, named after their respective engine horsepower limits. The 1998 season marked the äpr racing team’s initial entry in the series, with a 2nd-generation (W20) Toyota MR2. Two years later, they moved to its successor, the W30 Toyota MR-S (or MR2 Spyder), albeit with heavily modified bodywork that included the fitment of a hardtop.

For the 2006 season, the team obtained sponsorship from Disney Interactive Studios, the conglomerate’s video game and interactive entertainment division and, as a result, one of the team’s MR-S racers was branded as the Toy Story Racing car and given the number 101, as shown at left. This MR2 Spyder won the 2006 season’s final round at Toyota’s Fuji International Speedway, with Morio Nitta and Shinichi Takagi behind the wheel, and finishing fourth overall for the season in the GT300 class. The 2007 season saw Nitta and Tagaki replaced by Kazuya Oshima and Hiroaki Ishiura in the #101 Toy Story Racing car, and an even better result: 2 outright victories (in Round 2 at Okayama International Circuit and Round 4 at the Sepang Circuit) plus the overall GT300 championship.

The 2008 season saw the obvious decision to rebrand the Toy Story Racing car as the Lightning McQueen äpr (racing) MR-S, accompanied by a change in number to match the animated racer’s 95 (which, in an ironic twist, commemorates the year that the original Toy Story movie debuted). Yes, Lightning McQueen lives! Alas, the real racer failed to match his animated namesake’s record, for, in spite of a victory at Round 3 at Fuji International Speedway with Kohei Hirate and Keisuke Kunimoto at the helm, the car only managed a 9th-place standing at the end of the 2008 season, failing to finish its last race. Worse, this was the end not only of Disney co-branding, but of the MR2 Spyder’s GT300 racing career as, for the next season, the äpr racing team replaced it with the Toyota Corolla Axio GT, a Frankensteinish mashup of a modified-beyond-recognition Corolla sedan body and the Lexus IS 350 and GS 350’s 2GR-FSE 3.5-liter V6 placed in a mid-rear-engined position (where the back seat would normally be).

Beyond Cars
Diehard Disney/Pixar fans are well aware of a number of references (or “Easter eggs” or inside jokes) that appear across most if not all Pixar films, such as a character voiced by John Ratzenberger, the yellow with a blue stripe and a red star Luxo Ball or A113 (a homage to a classroom at CalArts, the alma mater of Disney/Pixar’s John Lasseter and Brad Bird, among others). Then there’s the iconic Pizza Planet truck, a 3rd-generation (1979-1983) Toyota pickup truck known as the Hilux outside North America, as evidenced by the once-faddish “YO” tailgate and single round headlights, as shown at right.

The Pizza Planet truck has made an appearance in every full-length Pixar movie, with the possible exception of The Incredibles. And even that is a point of contention among Disney/Pixar buffs, with the Jim Hill Media site, among others, providing purported evidence of a blink-and-you’ll-miss-it appearance in the superhero family flick, while Lee Unkrich, director of Toy Story 3 and co-director of Toy Story 2; Monsters, Inc. and Finding Nemo, affirms, in a Formspring Q&A, that “The Incredibles is the only Pixar film that does not have the Pizza Planet truck.”

What about Cars 2?
While the original Cars movie received the most tepid reviews of any Disney/Pixar film to date, its ensuing highly profitable merchandising and toy bonanza, which surpassed even Toy Story‘s, led the Pixar studios to fast-track a Cars 2 sequel. And the new film’s globe-trotting World Grand Prix plotline that unfolds in England, France, Italy and Japan makes it a natural for a cast of Gandhi or Ben-Hur proportions, as Autoblog reminds us (all the better to sell more toys, of course). Yet, among the primary and secondary characters revealed so far, Toyota influence appears scant. 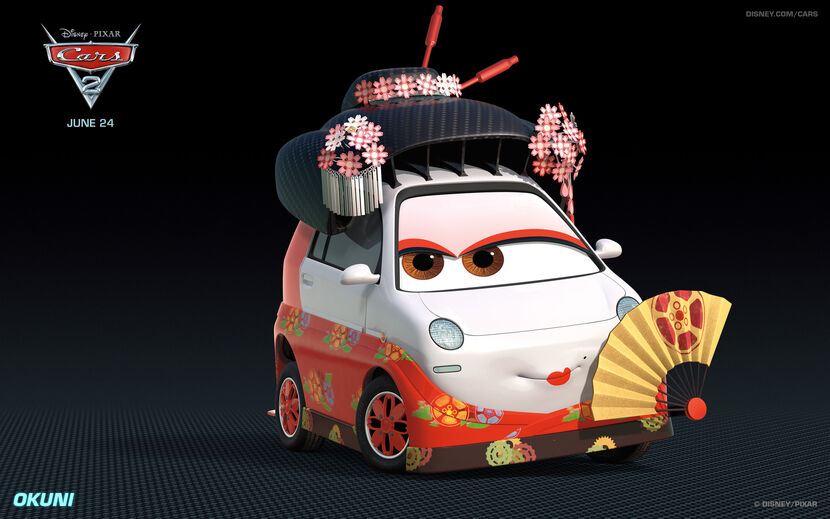 Although Le Mans (or Le Motor, as Cars 2 calls it) Prototype racer Shu Todoruki would appear to be a natural for some Toyota GT-One (or even Mazda 787B) influence, its shape is too broadly generic to track down to any one source, save for a lot of Peugeot 908 HDi FAP around the headlights. Even more generic-looking are the boxy sumo-wrestling microvans Kingpin Nobunaga and Pinion Tanaka. As to micro Kabuki dancer Okuni (upper left), she appears to be, at first glance, a Smart ForTwo with a Fiat 500 nose, but a possible Toyota connection appears in those oval headlights that recall the eCom (lower left) a limited run of 50 electric vehicles that first appeared at the 1997 Tokyo Motor Show.

On the other hand, the first and second Cars 2 preview trailers show the presence of a good number of 1st-generation Scion xBs (or 1st-gen Toyota bBs, for the Japanese Domestic Market-oriented among you) in the Tokyo airport and sumo wrestling match scenes. And does that photo at the right also show a ‘toon take on a 3rd-generation (XF-30) Lexus LS / Toyota Celsior? At any rate, we’ll know soon enough what possible surprises Cars 2 holds in store for us. This author’s inner child can hardly wait…

Thanks for the tip, José Fernely