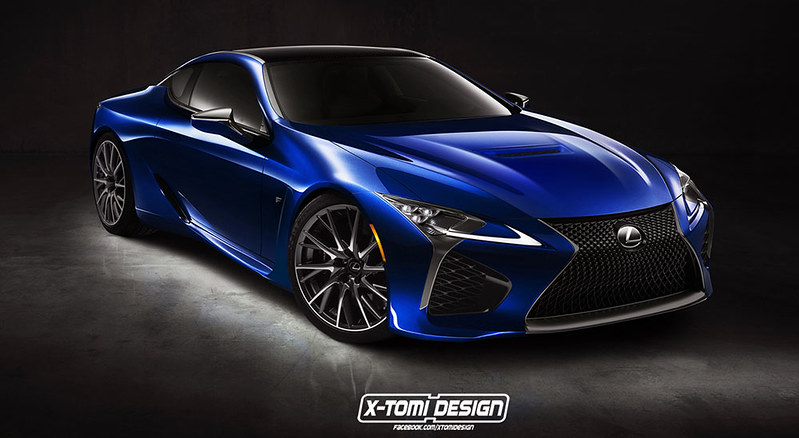 The long-rumored Lexus LC F became one step closer to reality when a European trademark application surfaced, as first reported by AutoGuide.com on February 4th. Our friends at the Lexus Enthusiast blog added that the actual European Union Intellectual Property Office filing for LC F was carried out the day before, under number 016313173. Australia’s Performance Drive also uncovered a second, seemingly redundant Lexus LC F trademark filing at the EUIPO on February 6, under number 016320277. The next day, an LCF trademark (note no space between the C and the F) was filed by Toyota in the United States under Serial Number 87327008. The latter filing was accompanied by the rather obvious LC F logo shown below.

Most pundits to date have believed that a Lexus LC F would be powered by a twin-turboed version of the LC 500’s 2UR-GSE 5-liter V8 producing somewhere between 600 to 640 hp (if the one-off Lexus LS 460 TMG Sports 650 is any indication), and we’re certainly hoping this is still the case. Autocar‘s report on the LC F trademark filing, however, also harkens back to a late 2016 conversation with Lexus LC chief engineer Koji Sato, who noted that

…the hybrid technology would be more interesting if the (LC F) project was approved.

…“The interesting thing is that Porsche is developing a sports car with electric power, and there is the BMW i8, so maybe a big engine with more power is a little bit heading in the old style. The hybrid model may be an interesting idea. The sudden torque provided by the electric motor is much faster and more unique – and perhaps more interesting for the customer.

“Lexus is a pioneer of hybrid systems and perhaps we have a role to show that hybrid has more capability now. It would be a unique driving experience, I think…”

Lexus parent Toyota’s mantra of kaizen, or continuous improvement was certainly evident when it took the Lexus GS 450h’s 3.5-liter V6 plus electric motors 2GR-FXE powerplant, added VVT-iW (Wide) functionality to the intake valves, raised the redline by 600 rpm (to 6600), swapped out the nickel-metal hydride battery pack for a lighter and more compact lithium-ion unit and similarly shrank and lightened the electric motors to create the 8GR-FXS powerplant debuting in the LC 500h.

More radical, perhaps, is the Frankensteinish mashup of a traditional rear-wheel-drive hybrid Electronically-controlled Continuously Variable Transmission (ECVT) with intelligence (the GS 450h’s L110 unit or some variant thereof) with a 4-speed torque converter automatic transmission (perhaps a variant of the venerable Toyota/Aisin A340 unit?). This “dual” transmission provides stepped access to the torque generated by the electric motor, and recreates a 10-speed transmission with three virtual gears between each of the automatic transmission’s physical gears. The resulting L310 Multi-Stage HV transmission is at the heart of Lexus’ first-ever Multi Stage Hybrid System, which also features ‘M’ Mode—the first driver-initiated gear shifts offered on a Lexus full hybrid powertrain.

CarAdvice‘s Mike Stevens also provides excellent, thoughtful analysis on other LC F powertrain possibilities. For one, he reminds us of David Undercoffler of Automotive News’ assertion that

A high-performance LC F model is also likely, but this could take some time. A turbocharged version of the 5.0-liter V-8 wouldn’t be possible in the LC, according to another engineer at the press launch. This means the brand would have to wait until a new generation of turbocharged V-8 bows, likely in a midcycle update of the LC.

Stevens then suggests the possibility of a higher-output version of the 3.5-liter twin turbo V6 that debuted in the 5th-gen Lexus LS. Or might Lexus couple this engine with electric motors and a lithium-ion battery pack to create the marque’s first-ever turbocharged hybrid?

Shouldn’t it be called an LC Fh or LC hF, then?
Conventional wisdom says yes, but there are no such trademarks being filed by Toyota. And, with Lexus’ turbocharged models now joining the Mercedes and BMW arbitrary badge-inflation bandwagon (350t=500, and, possibly in the future, 200t=300), perhaps another sacred cow will be slain in that full-on F models can be hybrids without an “h” badge. Or maybe it’s a hint that the F-as-hybrid notion is a false one and that the LC F will be powered solely by a gasoline engine as other F models have been to date.

And what might an LC F look like? The rendering at the top of our story, by X-Tomi Design, is certainly a viable prediction.