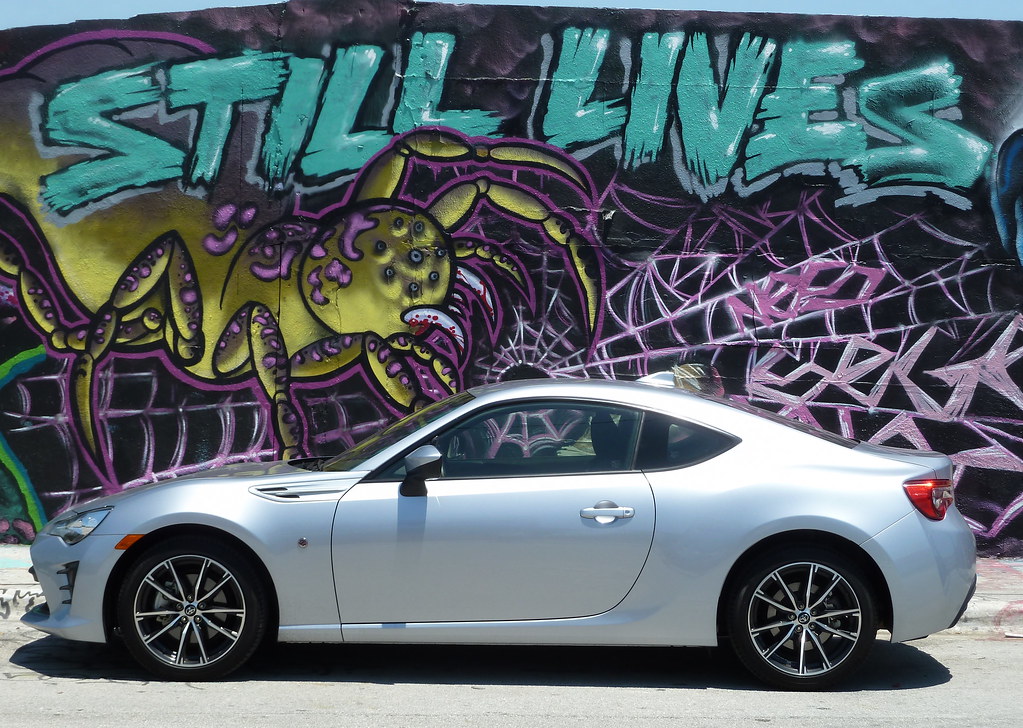 Colloquially, to 86 something means to get rid of it, kill it or throw it out. So there was a hint of irony when Toyota discontinued the Scion brand that the FR-S model name was also 86ed in favor of…86! The carmaker itself couldn’t resist having some fun with this, titling the official announcement Toyota to 86 the FR-S Name.

This is, of course, a bit of oversimplification. The 86 name has been in use outside North America for Toyota’s collaboration-with-Subaru 2+2 rear-wheel-drive sports coupe since its launch in early 2012. The badge itself is a homage to the mid-1980s 5th-gen Toyota Corolla / Sprinter AE86 sports coupes. (A revival of the Celica badge might’ve been more appropriate, but I digress…)

The Exterior
The Scion FR-S to Toyota 86 transition for the 2017 model year coincides with a planned mid-life refresh. Although the basic sleek and attractive Toyota 2000GT-inspired shape remains, most of the exterior tweaks do the car no favors. The new nose/bumper treatment is more bulbous and bulky, with wavy contours above the lower grille opening that, from some angles make you wonder if the bumper is dented. The bumper edge faux slatted intakes are overwrought, and the side front fender-top “intakes” are larger and more fake-looking than ever (though still cleaner than their Subaru BRZ counterparts). Further, the cool-looking pre-facelift “86 Piston” badge gives way to a circular piston-less 86 logo that sits by itself on the front fenders, reminiscent of the tacked-on fender turn-signal lights that cluttered so many car designs during the late 20th/early 21st century. 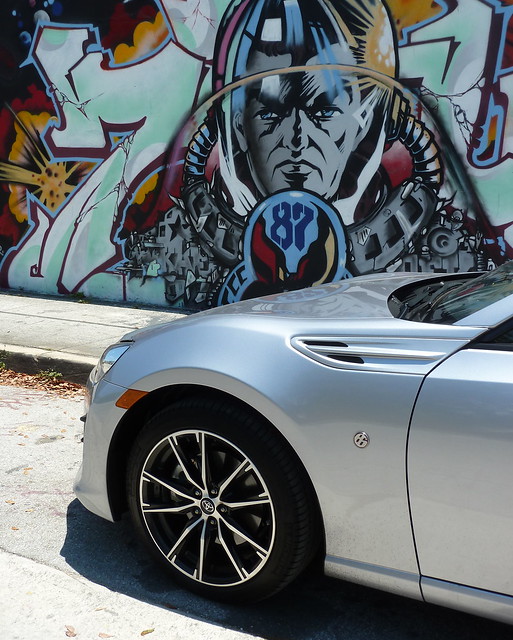 Mind you, the facelift does bring some improvements. LED lighting use expands from taillights and center mounted stop lamp to brake lights, rear turn signals, daytime running lights and headlights. The latter are quite effective at night, no mean feat in such a low-slung car. And the new wheel design is more attractive than its predecessor.

The Interior
At a glance, two major interior changes are evident in the Scion FR-S-to-Toyota 86 transition. The front seats’ bright red accents on the shoulder bolsters and red accent stitching throughout give way to more muted black and silver. Even as we bemoan the loss of these pops of color in the 86 interior, we must admit they didn’t necessarily work with every exterior color (:cough: Hot Lava :cough:). 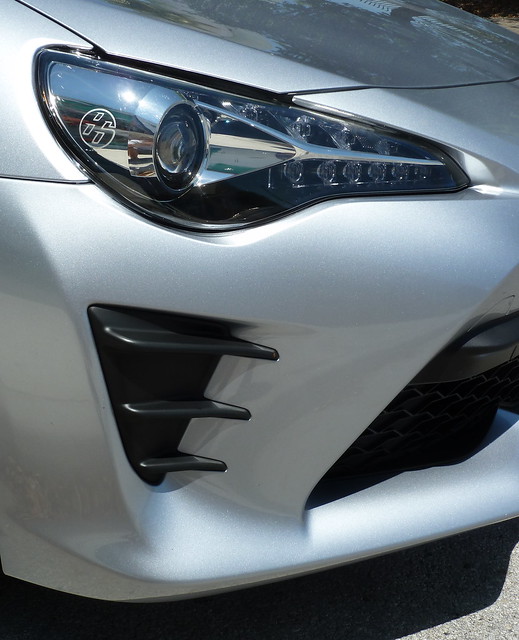 Also, the T-mesh faux carbon fiber trim on the passenger side of the dashboard gives way to “Granlux” trim. This is simply the Toyota brand’s name for synthetic suede, thus joining the Ecsaine, Alcantara and microfiber monikers used by Lexus. (For more on the subject, refer to yours truly’s August 2010 My.IS article). Granlux trim also appear on the 86’s door panels and upper-seat bolsters.

A third notable change is a new steering wheel with remote audio controls. Said audio (an 8-speaker Pioneer AM/FM/HD Radio system) is definitely aimed at Millennials, for it lacks two features considered de rigueur by this aging baby boomer: SiriusXM satellite radio and a CD player. After going through the limited selection of Apple Music selections on my iPhone, I managed to connect to my Pandora stations there. 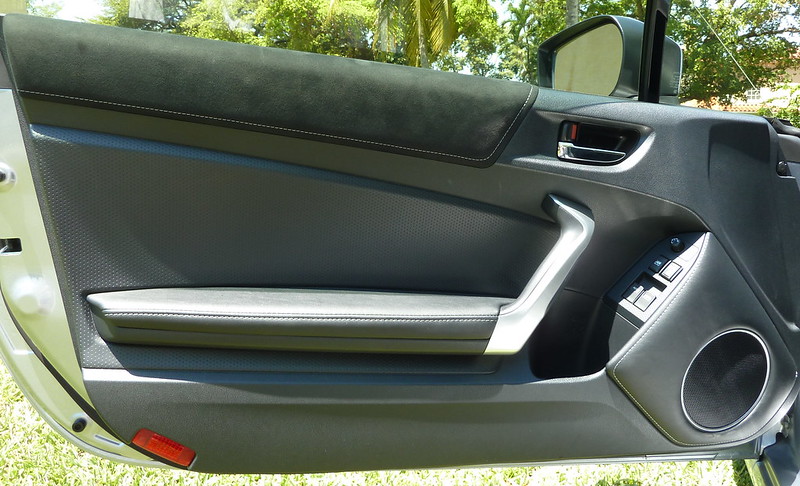 The dashboard top and aforementioned Granlux accents are soft-touch with a high quality feel. The door panels, on the other hand, are of hard plastic save for a swath of Granlux at the top and a soft armrest. Yet, the plethora of textures, finishes and materials on the door panels, seats and even the carpeted floor mats that might seem cacophonous to some actually add interest to what otherwise would’ve been an unbearably drab black-on-black-on-black interior. The perforated vinyl look on part of the door panels’ hard plastic was particularly convincing.

I expected the lack of a center armrest to be a glaring omission but, in fact, I didn’t miss it at all. The movable dual center cupholders were quite useful not only in their adjustability, but, in their forward most position, created a useful nook for propping up an iPhone.

A closed roof, a larger (6.9 cubic feet) trunk and folding “+2″ rear seats make the Toyota 86 a more practical and usable car than a smaller roadster such as a Mazda MX-5 Miata. Just don’t expect those rear seats to be very usable except for very small children. On a press jaunt several years ago, as the shortest of three colleagues, I was relegated to the back seat of the Scion FR-S. Moving the passenger seat forward yielded tolerable legroom (nominally, it’s 29.9”). The bigger issue, however, is that the front seat is mounted so low that your feet will feel like they’re being crushed in a vise unless you go barefoot or, at most, wear super low-soled shoes such as Puma Drift Cats. 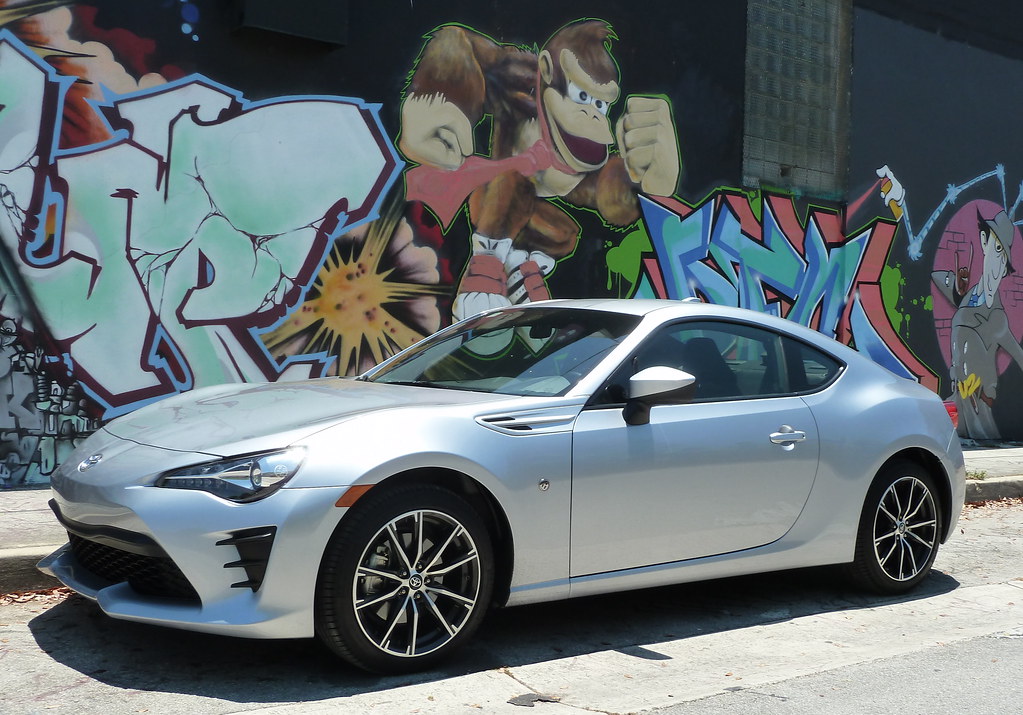 Electronic nannies: only the bare minimum required by law
After dealing with the unexpected plethora of electronic nannies on the 2017 Mazda Miata Grand Touring I recently tested, it was refreshing to revel in the back-to-basics simplicity of the Toyota 86. No LDW/ACC/HBC/BSM B.S., just the required-by-law anti-lock brakes, traction control and stability control with full-off and track modes, plus a very useful backup camera with guidelines. Well… Toyota does remind us that the STAR Safety System also includes Electronic Brake Distribution (EBD), Brake Assist (BA) and Smart Stop Technology (SST).

The driving experience
Thankfully, the changes for the 2017 Toyota 86’s mid-life refresh aren’t all cosmetic. The most prominent mechanical change is a 5 horsepower bump (from 200 to 205) and a similar torque increase (from 151 to 156 lb/ft) for manual transmission 86s. (Automatic transmission 86s retain the old lower numbers). The manual transmission’s individual gear ratios remain unchanged, but a lower (numerically higher) differential final drive ratio (from 4.10 to 4.30) helps with acceleration.

The suspension, too, has seen a few tweaks, with revised shock tuning, a change in the spring rates and the rear stabilizer bar is now slightly larger (15mm vs the outgoing FR-S’s 14mm). On both manual and automatic 86 models, Hill Start Assist Control (HAC) helps prevent the car from rolling back on steep hills from a stop.

Curb weight, too, has seen a slight unwelcome increase (from 2758 to 2774 lbs for manual transmission models). 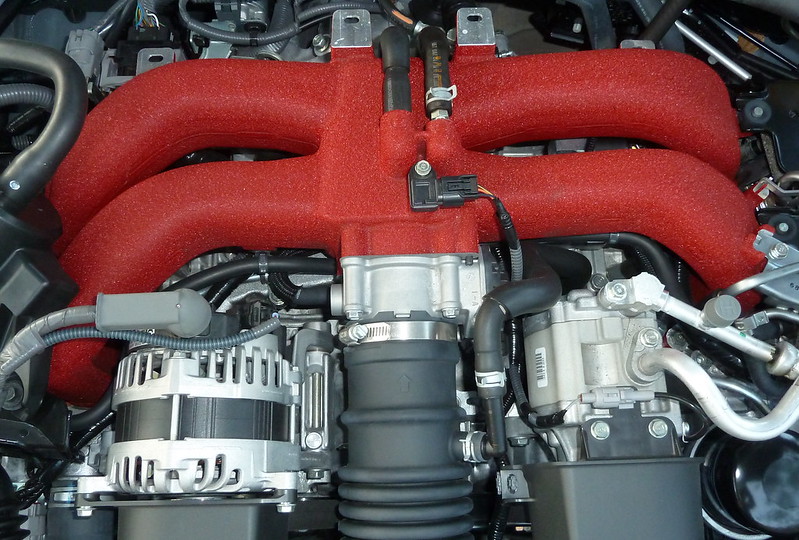 Enough with the numbers. How is the actual driving experience? A fun, agile blast just about sums it up. The use of Subaru’s FA20 (or 4U-GSE in Toyota parlance) horizontally-opposed flat-four boxer engine (call it what you will) allows for an ultra-low center of gravity (18″ off the ground), a figure that bests Porsche’s pre-718 Cayman (19″) and Nissan’s GT-R (19.5″). Even with about an extra foot of wheelbase and overall length and a couple of hundred extra pounds, the Toyota 86 recalls the light tossability of the Mazda Miata far more than it does larger, heavier sports coupes such as Camaro, Mustang or the late Hyundai Genesis. Body roll is minimal, and the Michelin Primacy HP 87W summer tires (widely derided as “Prius tires” when they are, in fact, used on that model’s Plus Performance, Touring and European-market versions) are well-suited to the car. Steering feel is commendable for its electric power assist. As to the haters that trot out the pitchforks and demand one of Subaru’s turbocharged engines under the hood, we remind them of the virtues of a light, balanced, agile “momentum” car whose deft handling moves are not overpowered by its engine.

We need to throw out there one more set of numbers, though: fuel economy. Our observed average, in a leadfooted mix of city and dense suburban freeway driving was 19.2 miles per gallon. This compares to official EPA Fuel Economy numbers of 21 mpg city, 28 mpg highway and 24 mpg in combined driving. Those numbers, by the way, are 1 to 2 mpg lower than the corresponding 2016 numbers (22/30/25). Chalk this up primarily to the change in differential (final drive) ratio, plus the slight increases in power, torque and curb weight.

Still, there is one major area where there’s still more room for improvement… 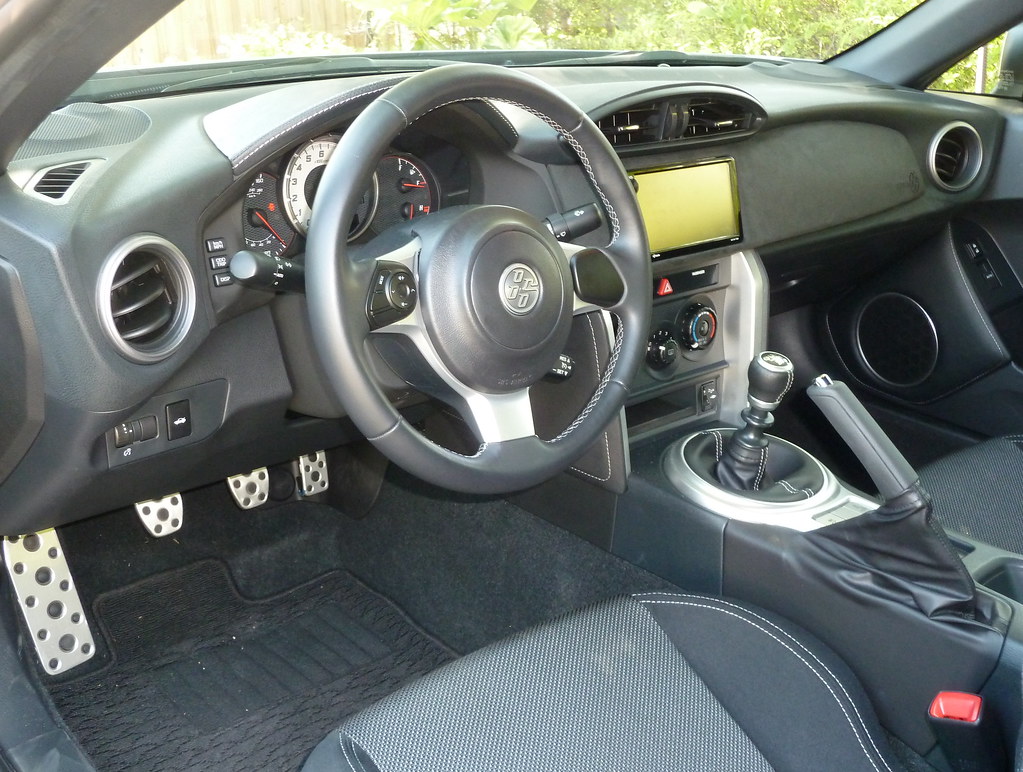 The manual shifter: Achilles’ Heel healed but not cured
My first driving exposure to the “Toyobaru” sports car was actually around mid-2012, when we borrowed a Hot Lava manual Scion FR-S from the Toyota press fleet to get from southern California to the Oregon long-lead press preview for the 2013 major refresh for the 4th-gen (XF40) Lexus LS. Yes, the twisty mountain roads were an unforgettable blast unreproduceable in flat-as-a-pancake Florida. But the manual shifter and clutch takeup were balky, requiring careful, deliberate action. In spite of having driven manual transmissions for almost 40 years at that point, I occasionally stalled it in both reverse and first gear, just like a newbie. I later learned that this was the same pre-production prototype that had been mercilessly thrashed at the hands of Motor Trend staffers (including pro race car driver Randy Pobst) for a comparison test of $28K-and-under performance coupes.

Flash forward to May 2015, and a SAMA (Southern Automotive Media Association) event hosted by Subaru at Homestead-Miami Speedway. In attendance was a manual Series.HyperBlue Subaru BRZ. A couple of laps on the track’s “roval” (road course inside the oval) revealed shift feel that was notably improved over the 2012 Scion FR-S I’d sampled on the West Coast, but still wanting compared to the Miata. And the 2017 Toyota 86? It felt maybe a bit better still than that BRZ, but not quite “there” yet.

Shifts feel a bit rubberier and less “crisp” and precise than they do in Mazda Miata manuals. The “vertical” shift throws (1-2, 3-4 and 5-6) seem a bit longer than ideal, while the “reverse S” shift planes (2-3 and 4-5) seem a bit too close together. At least a digital indicator in the instrument cluster is a reassuring confirmation of the gear you’re in. And the “lift ring” to shift into reverse? It might be off-putting to some, but for me it’s a nostalgic reminder of my first-ever manual transmission car, a red 1973 Opel 1900 (Ascona A) 3-door station wagon, which also had that feature. 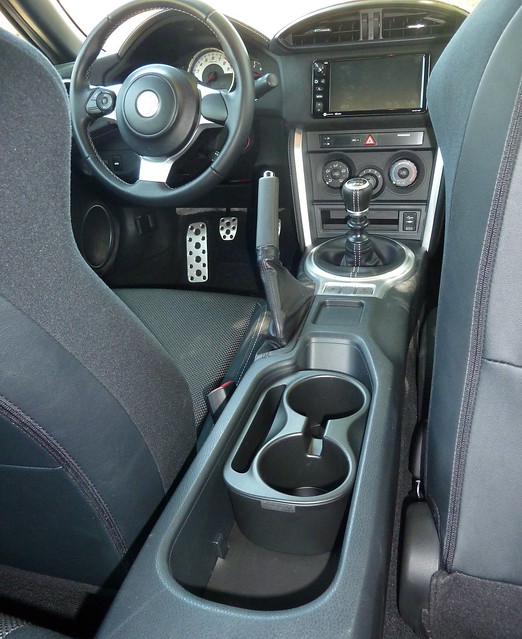 I’ve written at length about the “Toyobaru” coupe’s transmissions in the past, with initial and followup stories dating back to early 2012. To summarize, recent Japanese sports cars including the Honda S2000; Mazda’s RX-8 and 2nd-gen (NB) MX-5 Miata; the Scion FR-S, Subaru BRZ and Toyota 86 triplets and, probably, the newest ND Miata-derived Fiat 124 Spider all share the same basic Aisin AZ6 6-speed manual transmission. As I’d noted then, though,

…the Aisin AZ6 is but the basic “framework” or “structure” for the transmission. Each carmaker is able to tweak and tune such parameters as individual gear ratios, transmission cases, internal architecture, drive shaft coupling, clutch actuation and even shift “feel”. The fiercely independent, go-it-alone Honda, in particular, is understood to have widely modified its take on AZ6 for its S2000 sports car. The carmaker, which develops its own widely-praised transaxles, saw the need to swallow its pride and turn to archrival Toyota’s keiretsu for its first front engine/rear-wheel-drive transmission in decades in order to meet S2000’s cost targets.

It seems that Honda and Mazda engineers have done a better job in optimizing those parameters than their counterparts at Subaru and Toyota. Here’s hoping that Kaizen, or continuous improvement leads to ever-better shift feel for the rumored 2nd generation of the Subaru/Toyota sports car collaboration, especially given Mazda’s recent alliance with Toyota.

In parting, a random observation
The Toyota 86 is chock-full of “86” Easter eggs, ranging from the myriad badges to the 86mm bore x 86mm stroke of its engine to the 86mm diameter of its exhaust pipes. It seems, though, that our particular Steel (silver) tester had one more: a license plate ending in 86. Sheer coincidence? Or yet another deliberate “Easter egg”? 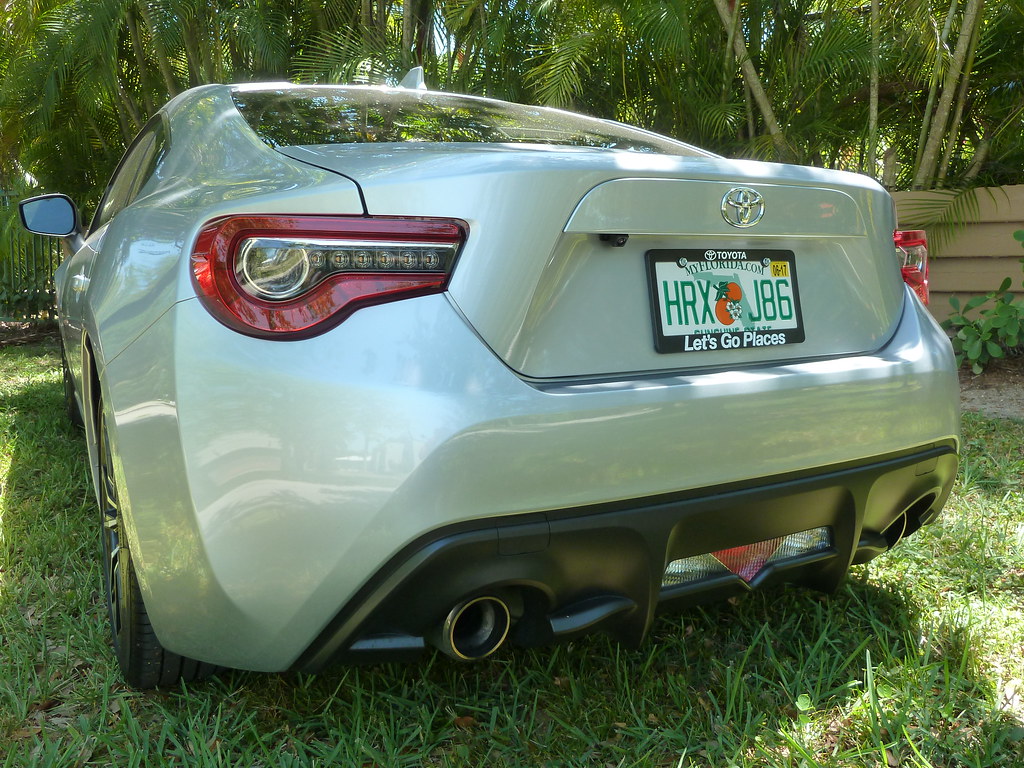 All photos by Joaquín Ruhi