Hardcore, deep-dive Toyota fans know that, in the 21st century, the rarest, most sought-after ne plus ultra of Japanese domestic market (JDM) Toyota-branded high performance is represented by four initials: GRMN. Only a quintet of rare, limited-edition Toyotas were deemed worthy of wearing this vaunted badge. Just 100 copies each of four of them were built.

In 2015, Toyota GRMN went from the brand’s smallest car to one of its largest, the Mark X GRMN sedan. This relative of the Toyota Crown and 3rd-gen Lexus GS is perhaps the only one to combine the 2GR-FSE 3.5-liter V6 with a 6-speed manual transmission (presumably the Aisin AY6/Toyota RA60 series unit) and a Torsen limited-slip differential.

The most recent of the lot is the 86 GRMN, which was introduced last year. Aside from numerous carbon fiber bits (which help contribute to a 100-lb weight loss) and a monstrous fixed rear wing, the Subaru-sourced FA20 2-liter flat-4 is tweaked to produce 216 horsepower and 160 pound-feet of torque (gains of 16 horses and 9 lb/ft versus stock). 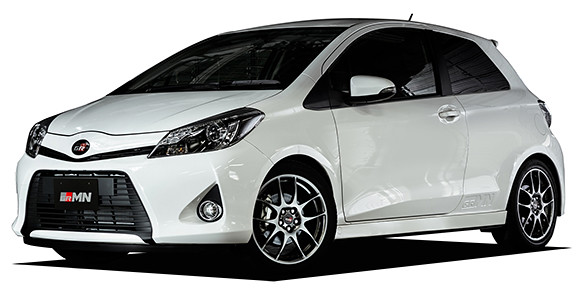 The most-produced GRMN model (with a 200-unit run, double that of its other siblings) is 2013’s Vitz GRMN Turbo shown above. It was the Toyota brand’s first turbocharged model since the final demise of the Mk4 Supra in August 2002. Adding a turbocharger to the 1.5-liter 1NZ-FE 4-cylinder engine boosted its output to 150hp and 152 lb/ft of torque. It features a 5-speed manual transaxle, 4-piston caliper brakes, a sports exhaust system, sports-tuned suspension and 215/45R17 tires on BBS aluminum wheels.

Concurrent with a mid-December 2016 news release of the TOYOTA GAZOO Racing WRC (World Rally Championship) racing team came a brief, enigmatic one that touted “a return to the ‘hot hatch’ market” with “an expansion of the Yaris line-up with a performance oriented version”.

A month later, a followup Toyota Europe news release brought us the two detailed renderings shown below, and informed us that

Based on a 3 door body type and equipped with a powerful engine of more than 210 DIN hp, this new Yaris high performance derivative is making the link between the Yaris WRC rally and the Yaris model line-up.

So what engine, exactly, would power this “New Yaris hot hatch”? Autocar predicted a 1.5-liter turbo (presumably either a further-tuned variant of the Vitz GRMN Turbo unit or one that builds on the more sophisticated VVT-i and dual Atkinson/Otto cycle 2NR-FKE unit going into more pedestrian 2017 Euro Yaris models). InAutoNews predicted a 1.6-liter turbo, to match the WRC Yaris racer’s displacement. But they would both be wrong, for a third Toyota Europe news release – this one on the marque’s 2017 Geneva Motor Show activities – dropped a couple of unexpected surprises. For one, the “New Yaris hot hatch” would be powered by a supercharged 1.8-liter engine. For another, it would mark the premiere of…

The GRMN badge for Europe
Yes, the highest-performance Toyota Yaris ever – badged Yaris GRMN – becomes not just a spiritual but a literal successor to Japan’s GRMN Vitz Turbo. It also marks an enormous expansion of the GRMN badge, from fringe JDM specials produced in lots of a hundred or two to broadly available European top-of-the-line model. If it succeeds (and the Yaris WRC’s outright victory in Rally Sweden certainly can’t hurt), we wouldn’t be surprised if Auris GRMN or 86 GRMN models would eventually join the European lineup.

What does GRMN stand for, anyway?
We addressed that question 6 years ago, but we’ll repeat much of what we wrote then:

GR stands for GAZOO Racing…Toyota describes it as “A project of the GAZOO.com website that involves a team of test drivers (led by TMC’s master test driver Hiromu Naruse) who participate in races, develop automobiles, and support motorsports activities”…

What about the MN?…(T)here are two schools of thought about (this). Most pundits believe that MN stands for Master (of the) Nürburgring, a reference to the late legendary Toyota Master Test Driver Hiromu Naruse, while Paul Horrell of Top Gear instead claims that MN stands for Morizo Naruse. Morizo is actually the name of Toyota President and CEO Akio Toyoda’s pet dog (itself named after a green shrub that was a mascot of Japan’s 2005 World Expo in Aichi Prefecture, where Toyota is based). More significantly, though, Morizo is Akio Toyoda’s screen name on GAZOO.com and the pseudonym under which he drove the Lexus LFA in the 2009 24 Hours of the Nürburgring race. Paul Horrell wryly notes that the Morizo alter-ego also allows Toyoda to be “free to be rude about Toyota’s duller cars on the Gazoo blog”.

What do we know about the Yaris GRMN’s 1.8-liter supercharged engine?
At this point, nothing, except for approximate displacement, means of boost and the fact that its output is over 210 DIN hp.

The NR and NZ engine families utilized on gasoline-powered, non-hybrid Euro Yaris/Vitz models max out at 1.5-liters, so we would, instead, need to turn to the next-largest ZR engine family. There are a trio of 2ZR variants with a 1798cc displacement: the “base” (dual VVT-I) 2ZR-FE, the Valvematic-enhanced 2ZR-FAE and the hybrid gasoline-electric 2ZR-FXE. Forget the latter, of course, as a building block for the Yaris GRMN.

A fact worth noting is that post-2012 “Series 3” versions of the Lotus Elise offer Toyota’s 2ZR-FE engine fitted with a Magnuson R900 supercharger, producing 220 PS (217 hp). So could the Yaris GRMN be building on this and turn out to be but the latest in a long string of “backdoor” Toyota/Lotus collaborations dating back to the early 1980s? Perhaps. Toyota Lotus Yaris badging would’ve had a nice ring to it, but it’s obvious that the intent is to grow GRMN as a performance badge. 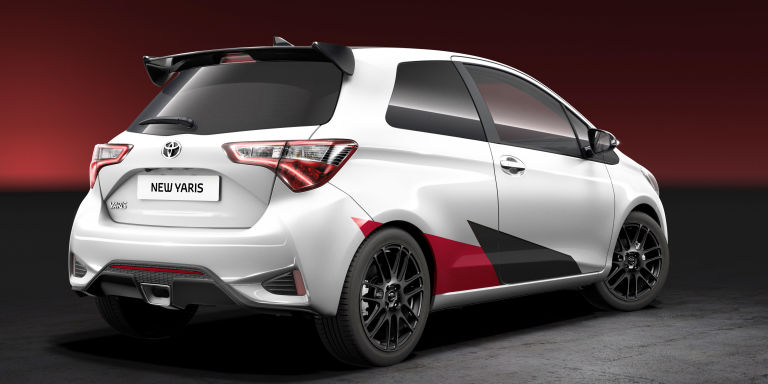 And what about the new “Dynamic Force Engine” family set to debut in the 8th-gen (XV60) Toyota Camry this fall? Highly unlikely, given that partial specs have only been issued for that model’s 2.5-liter versions, and that 2017 facelift versions of both Japan’s Vitz and Euro Yaris use engines that are either carryover or ported over from other Toyota lines.

Answers to these questions – as well as whether or not it’ll have a proper clutch-pedal manual transmission and be front-wheel-drive or all-wheel-drive – should hopefully come during Toyota’s 2017 Geneva Motor Show press conference on Tuesday 7 March at 12:30 PM Central European Time (6:30 AM U.S. Eastern Time / 3:30 AM U.S. Pacific Time).

Which markets will offer the Yaris GRMN?
First, an important clarification is in order. Worldwide, the Yaris badge is currently used on a trio of totally different – even unrelated – model lines. The first of these is the Vitz / “Euro” Yaris (XP130 in its current, 3rd-generation). Then there is the simpler, less expensive and more angular “XP150” Yaris, first launched in Asian markets outside Japan and now spread to Central and South America (including Mexico). Finally, the U.S., Canada and Mexico also offer a renosed version of the current 4th-gen (DJ) Mazda2 sedan with Yaris R or iA badging. 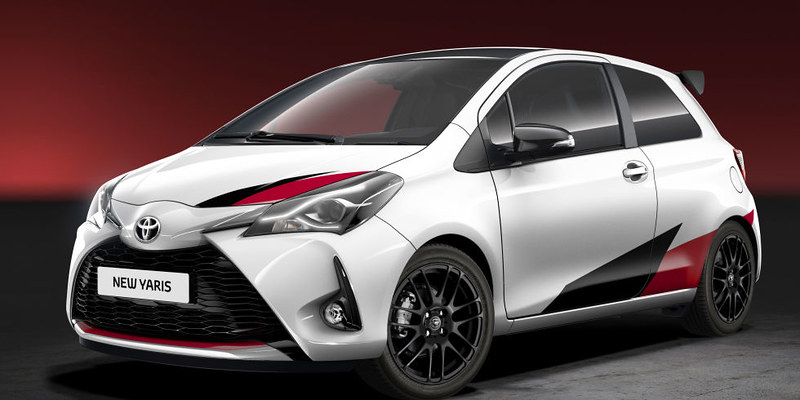 Yaris GRMN is, of course, derived from the XP130 Vitz / Euro Yaris, and its Geneva debut makes it an obvious shoo-in for the European market (whether it will be built in Valenciennes, France or imported from Japan is an open question). And we’d definitely predict a Toyota Vitz GRMN Supercharger counterpart for Japan.

But what about the other world markets that offer the XP130 Vitz / Euro Yaris? Sadly, reports from Australia and South Africa both say that the GRMN Yaris will not be going their way. And North America? Frankly, with the launch of a second “2017” facelift, my gut feeling was that the current XP130 Yaris hatchback would end its U.S. and Canada run this year. Its replacement for 2018? A “Toyotaized” Mazda2 hatchback imported from Mexico as a companion to the current iA sedan.

A new development, however, opens up some hope that the GRMN Yaris (or some other GRMN-badged vehicle) will come to our shores…